The Sonoma Community Center presents a benefit for Pets Lifeline with an all-star line-up of players on Wednesday, Aug. 29, opening with Sean Carscadden and Marty O’Reilly, followed by Talk That Talk that features Roy Blumenfeld of the legendary Bluesbreakers and members of the late John Lee Hookers band, and the evening ends with the Rett Hamer Band. For tickets and more info, point your browser to www.sonomacommunitycenter.org

Sebastiani Winery and Vineyards welcomes BackTrax on Friday, Aug. 31, kicking off at 6 p.m. The night is also a food truck Friday event, with plenty of off the grid snacks available.

The Plaza Bistro welcomes the Dan Zemelman Trio on Friday, Aug. 31, for a 7 p.m. start time. 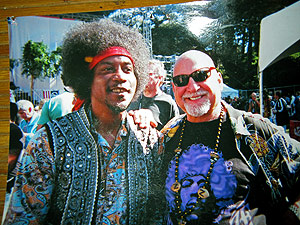 Well, not really, but if you hear this guy sing and play, you might think you’ve tripped right back to the ‘60s. Ralph Woodson and his Jimi Hendrix tribute, the Ralph Woodson Experience, take the stage at El Verano Inn for one-night only on Saturday, July 30, for a 9 p.m. show. Woodson has been honing his skills since he was a young child, when he first heard “Band of Gypsys.” Woodson performed “Hear my Train a Comin” on a 12-string acoustic guitar at a show that got him noticed by local talent scouts that eventually led to opening for acts like Sly and the Family Stone. After years of being a session man and opening for many of the name brands of music in the bay Area, Woodson formed his trio in 2001 with the focus of performing the Jimi Hendrix songs he grew up loving. He is also a Hendrix historian, knowing many facts and tidbits about the legendary guitarists life and recordings. With Woodson in the trio are Pete Roberts on bass and Dan Cueva on drums. The evening is also the innkeeper, Richard Danons birthday party. There is no cover for the show.

A Tribute to Texas songwriters will be held tonight, July 29, in the Meadowcroft Winery tasting room at Cornerstone in Carneros. Songs written by the likes of Willie Nelson, Waylon Jennings, Townes Van Zandt, Kris Kristofferson, Billy Joe Shaver and more will be covered by Adam Traum and a host of special guests, including David Thom, Pete Olson, Kurt Huget, Liz Brown, Tony Robinson and more. Sound will be provided by Gerard Serafini of Sonoma Valley Music. For more info or to make reservations for the show, call 934-4090.

Have you heard of James “Mingo” Lewis? We have, and were delighted to hear that he is now an instructor at Sonoma Music Arts School. Lewis had a name for himself already back in 1972, but a chance audition for Santana at Madison Square Garden, literally a live audition, led to him playing with the band on percussion for the next three years. Soon he was playing with the likes of Chick Corea, Al DiMeola, Michael Shrieve and even the Tubes. Lewis has made his home in Sonoma and is looking forward to teaching students at the school. “We are honored to be working with a musician of such caliber and experience as Mr. Lewis” said Aldo Mosca, Director of Sonoma Music Arts School. “This is a unique opportunity for musicians of all levels to learn from a true master.” For more information about Sonoma Music Arts School, call the school at 996-7661. 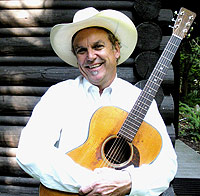 tonight, July 29, and Saturday, July 30, for a night of western Americana, kicking off at 8:30 p.m. Stuart, a hometown boy, will be celebrating the release of my new CD, “Deeper West.” Music is in Stuarts blood, as his great uncle is the one that penned the country classic “Ghost Riders in the Sky.”

The farmers market at the Sonoma Community Center has music on Saturday, July 30, with Wildflower Weed, kicking off at 10 a.m. The band describes themselves as “hippie mountain music.”

Little Switzerland will be having a blues show on Saturday, July 30, with the Rett Hamer Blues Band. That night, they will have Misty Adana sitting in on vocals. Adana has played with the likes of Freddie King and more. The event kicks off at 8:30 p.m. and there is no cover.

Murphy’s Irish Pub will have Misner and Smith tonight, July 29, for an evening of Americana, blues and indie-rock, kicking off at 8 p.m. Saturday, July 30, the snug welcomes Dan Martin with his reggae infused grooves, also for an 8 p.m. show. Sunday, July 31, brings in Peter Lamson for an early show, kicking off at 6:30 p.m. There is no cover for any of the shows at the pub.

The Olde Sonoma Public House has the reggae sounds of Midnight Sun Massive tonight, July 29, for a 7 p.m. show. If you’re wondering if this is the same Midnight Sun that you remember from the ‘80s, then yes; some members are indeed. There is no cover for the show.

Sebastiani Winery and Vineyards has the monthly “Food Vendor Friday” tonight, July 29, kicking off at 6 p.m. In addition to local food merchants, there will be some visiting from out of town as well. There will be live music in the tasting room, featuring the Rolling Blackouts.  There is no cover for the event.

The new Alsino Station Grill inside Cornerstone in Carneros has the tango sounds of Tangonero on Sunday, July 31. The evening kicks off at 5:30 p.m. with full dinner available. For tickets and more info about the show, call 933-4422.

Saddles Steakhouse at MacArthur Place has the swingin’ sounds of the Richard Olsen Trio on Sunday, July 31, for an afternoon show that kicks off at 2 p.m.

The Plaza Bistro welcomes the Lemish and Wick Trio to the backroom tonight, July 29, for a 7 p.m. show. Wick is a Sonoma native and is a sideman with many jazz groups in New York and the Bay Area. Saturday, July 30, the bistro has the J. Kevin Durkin trio, also for a 7 p.m. show. There is no cover for either show.

Stan Pappas, the “Sonoma Sinatra” will bring his Frank Sinatra tribute show on the road to Novato at Rickey’s bar tonight, July 29, for a 6:30 p.m. show. There is no cover.

The Jon Popenoe Blues Band will be brewing up some blues at the Lagunitas Tap Room in Petaluma on Saturday, July 30, kicking off at 3 p.m.

The Hellhounds are on the road all weekend, starting tonight, July 29, at Cuvee in Napa, where they will lay down blues starting at 9:30 p.m. Saturday, July 30, has the bluesmen in Healdsburg at Seghesio Winery for a show that goes off at noon.

Mondo American Beer Garden will have Sparrow on Wednesday, Dec. 15, at 7 p.m.

Olde Sonoma Public House in the Fiesta Marketplace will have Dan Martin on Thursday, Dec. 16, for a 7:30 p.m. show.

Whole Foods Market in the Sonoma Marketplace has EZ Kewl for an evening of music while shopping on Thursday, Dec. 16, at 6 p.m.

The Plaza Bistro will have Elaine Lucia in the back room on Friday, Dec. 17, at 7 p.m.

Murphy’s Irish Pub will have the Two Rock Ramblers on Friday, Dec. 17, at 8 p.m.

The El Dorado Kitchen will have a special night of music with the John Kalleen Group on Friday, Dec. 17, at 6 p.m. as part of the “Martinis and Music’ event in the fireplace lounge. There is no cover.

Tonights show was all over the map as far as genre.. a nice mix up of players and bands from all of Sonoma Valley…

Smokin’ Jaze – We be Smokin’ – Wakin’ up with the Blues

Black Cab – Beyond the Flesh – Song of Dee

Halfway to Nowhere – Beyond this City – Goodbye San Rafael

Jewel Mathieson – Lighten Up – We’ve come to be Danced