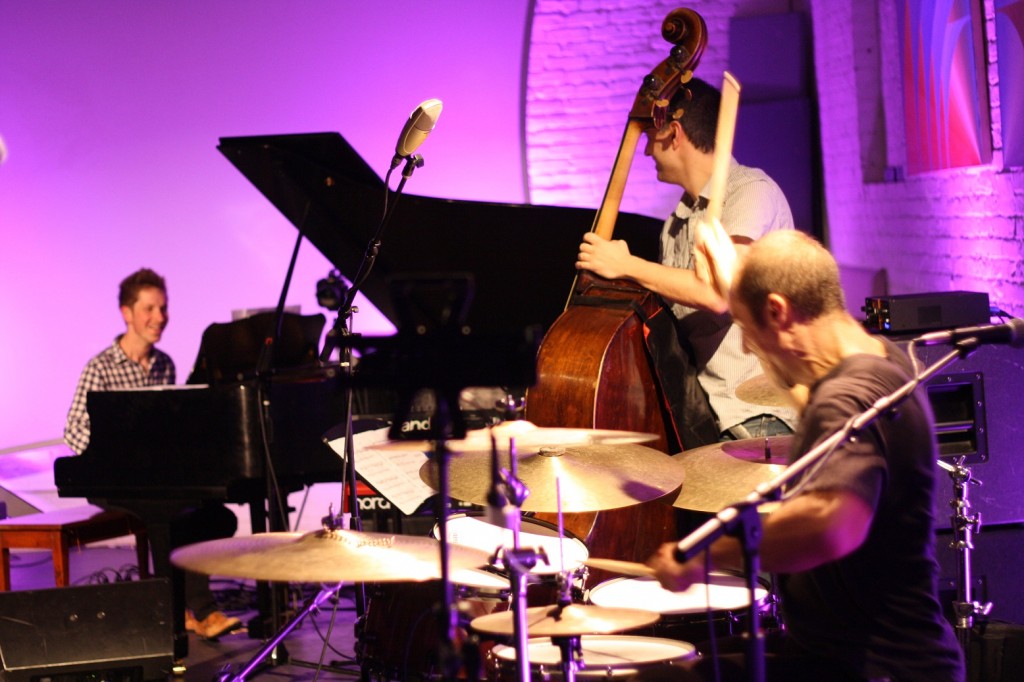 The Sonoma Community Center continues its 2015 Winter Performance Series in Andrews Hall on the Rotary Stage on Saturday, Jan. 24, with a show from SVETI, a New York-based jazz trio with local ties. The band features keyboardist Julian Pollack, drummer Marko Djordjevic, and bassist David Ewell. According to All About Jazz magazine, “Sveti is a group of absolutely monster musicians!” Julian Pollack spent his formative years in Berkeley where he began formal study of the piano at age of five with his mother, and was called a child prodigy, able to play difficult pieces of classical music well beyond his years. Pollack now lives in New York, where he met Marko Djordjevic, who is considered by many as a “world class drummer” and “a true innovator.” Djordjevic has played on more than 40 albums and has thousands of live performances to his credit. The show begins at 7:30 p.m. with doors open at 7 p.m. Tickets and the full Winter Performance Series lineup is available online at svbo.org, or by calling 938-4626 ext. 1.

Gundlach Bundschu Winery is kicking off it’s 2015 music series on Saturday, Jan. 24, with an appearance by Phosphorescent playing the barrel cave stage. Crystal Skulls, featuring Christian Wargo of Fleet Foxes and Alina Hardin will open the show, which kicks off at 7 p.m. Tickets and more info can be found by pointing your browser to gunbun.com.

The Sonoma Valley Veterans Memorial Building will be hosting the Sonoma Valley High School crab feed on Saturday, Jan. 24, and after the food, there will be dancing with local classic rockers BackTrax. The dinner portion is sold out, but you can buy dance-only tickets at the door at 9 p.m.

Rossi’s 1906 in El Verano welcomes the The Bumblin’ Bones and the Best Mates tonight, Jan. 23. Bumblin’ Bones was formed in April of 2014 by Ian Hinkley, who has been writing and performing songs on guitar and piano for 15 years in the bay area. Heavily influenced by Tom Waits, Jack White and Bob Dylan, he was joined by bass player Matt Ruff who after years of playing everything from punk rock to Ecuadorian folk music, had thrown himself full-force into the world of ’60s psychedelia. The act was finalized with the addition of Taylor Diaz on drums whose unfaltering, symphonized style perfectly beds Ian’s occasional scattershot guitar. Showtime is 9 p.m. Saturday, Jan. 24, it’s time for original rock music, with a few unique versions of covers, with Ten Foot Tone. The stage at the venue should be large enough for front-man Jon Williams to perform visually as well as musically. Showtime is also at 9 p.m.

Burgers and Vine presents Punching Billy and Death by Cowbell tonight, Jan. 23 for a night rock music and songs that feature the cowbell, and one that should have. Showtime is 9:30 p.m. Saturday, Jan. 24, it’s a dance party with Broken Silence Sound, also kicking off at 9:30 p.m. There is no cover either night.

The Annex Wine Bar presents Acoustic Soul tonight, Jan. 23, playing acoustic classics and blues featuring the vocals of Jackie Holzhauer kicking off at 7:30 p.m. Saturday, Jan. 24, it’s Ralph Cetola and Krazy Kat playing rock, blues and some cajun. That night also kicks off at 7:30 p.m. There is no cover but the venue is 21 and over only.

Adobe Road Winery has an open acoustic jam in the tasting room on Sunday, Jan. 25, kicking off at 4:30 p.m. Musicians are welcome to bring their own acoustic instruments; guitars, kazoos, dulcimers, banjos, bongos etc. The venue will also have wines by the glass and cheese plates available.

The Erik James Tasting Room has music tonight, Jan. 23, with has the New Copasetics with Tim Eschliman, Gailene Elliot, Sean Allen and Luis Rodriguez kicking off at 7 p.m. Saturday, Jan. 24, it’s the Left Coast Syncopators, featuring Tim Eschliman, Snakebite Jacobs and Kevin Zuffi also for a 7 p.m. show. There is no cover either night, but there is a $10 minimum.

The Plaza Bistro welcomes Rolando Morales tonight, Jan. 23, for a 7 p.m. start. Morales has performed throughout Spain, England, Italy, Ireland, Mexico and Hawaii. His diverse talents span the musical spectrum and on any given night you may hear him performing driving Cuban grooves to Latin rhythms with rock and funk elements, original sambas to passionately sung boleros, or even fiery classical and flamenco-inspired inventions to swinging Latin-jazz. There is no cover.

HopMonk Tavern Sonoma has another show in the “Listening Room” on Sunday, Jan. 25, with an appearance by Danny Click. Showtime is 8 p.m. and tickets will be available at the door. Tonight, Jan. 23, the tavern stage welcomes Girls and Boys, for an 8 p.m. start. Saturday, Jan. 24, it’s Hand Me Down, also for an 8 p.m. start.

The El Verano Inn welcomes Tsunami on Saturday, Jan. 24, for an evening of classic rock, kicking off at 9 p.m. There is no cover.

The Mosey Boys are on the road to Windsor with an appearance at the Sonoma Regional Library on Saturday, Jan. 24, for a 2 p.m. show.