Recently my colleague and fellow musician, Daedalus Howell, posted an article to his blog and in his printed space in the Sonoma Index Tribune about how so many local consultants that have put in years crafting their expertise are constantly asked to give up their talents for free. The debate rages on in the local musician community here in Sonoma Valley as well, and reared it’s ugly head recently with yet another venue offering “tips and beer” in exchange for a musical performance. I have been a performing musician for over 35 years in what I would call a semi-professional manner. I have made money playing music, not enough to make me rich, but enough to feed my AGS problem (Acquired Gear Syndrome.. the habit of acquiring gear that you probably will use once).  I have been on both sides of the story. I’ve played ‘just for tip’ gigs that ended up netting me more money than I would have ever asked for, I have also played well paying gigs that before the first set even ended, I would have given all the money back to leave right then. 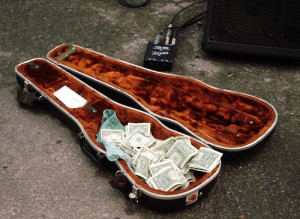 I have also done the freebie gig that led to actual paying gigs, that I would have not gotten had I not played the freebie. I have also done many more that never got me anything but exposure, from which many local musicians are dying.

There are so many problems with playing live music these days that I don’t even know where to begin, so I’ll honestly try to stick to the topic. And in in the full spirit of disclosure, this is my blog and totally my take. I encourage you to comment.

Back when I first started playing clubs in the early ’80s, bands got an average of $300 a night for a bar gig. Beers were a buck. Now beers are $4.50 and the average pay a bar band gets?.. you guessed it.. $300. Simple math would tell you that inflation alone makes that performance worth $1200 today.

If I am playing your venue ‘just for tips’ and your joint is so busy that without the band, you would have had Curly, Moe and Larry at the bar, even though the agreement was tips only, throw the band a bone after the show. Your cocktail waitresses are leaving with way more in tips than anyone in the band will make, and thanks to the band and the people they brought in, the waitress won’t be asking you for a raise that week… or quitting.

If the place is hopping and you are paying the band nothing while you sell way more plates of food, drinks, whatever than you would have without the band, then it is your duty to have one of your waitstaff work the room with the tip bucket.. twice a night. The band can’t do it.. they’re busy entertaining your customers that are buying things from you.. trust me.. patrons are not gonna not have that one more beer just because they tipped the band 5 bucks, but they’re also not gonna walk to the front of the stage and put the 5 bucks in the bucket either. It’s a two way street.

If you are a (bar, restaurant, coffee shop) and you clear away a 10×10 foot area for a band to set up in the corner of the room and provide them an outlet that may be in close proximity to where they’re playing and might be on the same circuit as the microwave, you are not a nightclub, and you can’t charge a cover unless all of it goes to the band. Period. You are also not the late  Bill Graham. You are a restaurateur or innkeeper. The band will draw people in, do for them what you’re in business to do when they arrive. Don’t charge them for the privilege of coming into your establishment and giving you money for things.

Most of the people the band will bring in will be their friends or family, as the venue has probably not advertised at all and EXPECT the band to not only play for next to nothing, but bring in people as well. These poor folks have been coming to see the musicians in all their configurations of bands for longer than you will ever know.. be nice to them.

You wouldn’t ask your chef friends to ” stop on by the store on your way over and pick up some food.. maybe you can cook something up” or your mechanic friends ” Hey, bring your tools, I’ve got a problem with my car.” If they offer.. Great!! But you wouldn’t expect it. Most musicians have day jobs, this is their passion, most would probably rather play than not play. It’s time to stop taking advantage of their passion. They are not solely vehicles to help you sell your wares. It’s nice to be respected and acknowledged for what is probably years of playing and practice that made them what you’re enjoying today.