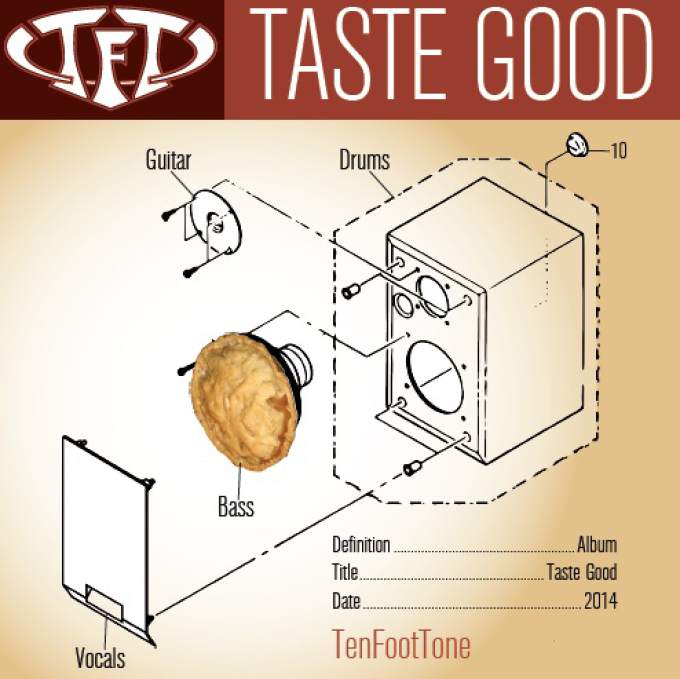 Ten Foot Tone took a unique approach to funding the latest CD effort, titled ‘Taste Good.” They put together, and we forget which one, an online fundraising effort with rewards to those that invested in the project, anything from a CD to a private party with the band at your house. Being local and knowing all the guys and playing with some, we helped out with the purchase of a CD, which we got on July 4 after the parade, which went in our shorts pocket, and promptly ended up in a friend’s swimming pool along with our wallet. But that’s another story. So we picked up a new disc this week and opened it up. Wow. Album art, lyrics, stories. Something to read while we listened to the tunes for the first time. We felt like it was 1975 all over again.

The core of the act has been together for at least 15 years, going all the way back to when the band was called Driven and had toured England and beyond, even landing a gig at the Cavern Club, which the Beatles made famous. With new drummer Dave McKee added to the line-up, along with Jon Williams, Gerard Serafini and Michael Noel, the band seems to be just now hitting its stride. The live act has always been second to nothing but maybe an old Tubes show, with stage props and the like, but the new disc showcases that the band can do more than just rock the house, which they do well. The disc is mellow, but not, all at the same time, with Williams creative vocals always putting a story in your head. Noel has proven himself an accomplished guitar player and truly has a style and tone all of his own with this band.

The act has always been an original one, with lead singer Williams proclaiming “I’ll never be a Hawaiian shirt band,” but he realized that people wanted to hear songs that were familiar, and let’s face it, four hours of originals is a tall order for a local act. So Williams set out to busking in front of the Sebastiani Theatre, the Plaza, in front of supermarkets, wherever he could, with his signature acoustic guitar and small battery powered amp, with the goal to learn 100 cover songs in a year, which he did. The show now features unique versions of cover songs, along with the originals, and when we say unique, sometimes you don’t recognize them until the band gets to the chorus.

You can catch the act tonight, Aug. 7, at B&V Whiskey Bar and Grille at 9 p.m. where you can likely pick up the disc. There is no cover. Hawaiian shirts are encouraged.

The Valley of the Moon Vintage Festival has announced the music acts for the coming festival, held always on the last full weekend of September, with this year being Sept. 25 – 27. Just to refresh everyone, the festival is the second oldest in the state, only to be upstaged by the Tournament of Roses festival in Pasadena. Since 1897, some sort of celebration has been occurring. Originally at the Rhinefarm Estate, which is now Gundlach Bundschu Winery, the festival is now held on the historic Sonoma Plaza. The festival is all-volunteer, with no one on the board getting paid, and the festival foots the bill for numerous non-profits in the Valley to set up shop in the plaza and fund their entities. So what about the music? Friday, Sept. 25, the Patrons Night celebration inside the historic Sonoma barracks will have a new look, with mustaches, as Mustache Harbor will provide the entertainment, kicking off at 6 p.m. and hand out free mustaches for all. Saturday, Sept. 26, the stage moves to behind City Hall and kicks off at noon with BackTrax, followed by Codi Binkley and the Sonoma All-Stars, the Tommy Thomsen Band and Danny Click and the Hell Yeahs. Sunday, Sept. 27, the day starts a little earlier, at 11 a.m. with Never Fear, followed by David LaFlamme and wrapping up with Lydia Pense and Cold Blood with Rick Stevens from Tower of Power doing a set as well. Other than the Patrons Night, all the music on the Plaza is free and open to the public.

For the 11th year in a row now, the Hemophilia Foundation of Northern California is presenting “Vine, Hops and Golf” at the Sonoma Mission Inn and golf course this weekend, Sunday, Aug. 9, with golf on Monday, Aug. 10. The wine and hops event, held at the Fairmont Mission Inn, will feature the music of Chris Twomey. Twomey plays rock, Americana and blues and is on a mini-tour of Northern California. The event also has tasting of regional vines and hops (we’re assuming this means they’ve been turned into wine and beer), appetizers, a foodie and wine paring class along with a silent and wine auction. Over the years, the wine event alone has raised over $250,000. The party gets underway at 4 p.m. and for tickets and more info, point your browser to hemofoundation.org.

One thought on “The Friday Aug. 7 Column”