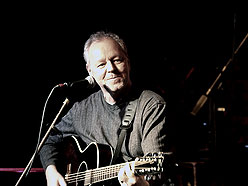 A little bit of Nashville comes to Sonoma Valley tonight, Aug. 12, when veteran singer-songwriter Joe Scutella comes to the Meadowcroft tasting room at Cornerstone in Carneros for a 7 p.m. show. Scutella is a 20-year veteran of the Nashville music business, having written songs for country artists such as Rhett Akins, George Ducas and Melodie Crittendon, as well as folk artists Donal Hinely, Ross Falzone and Peter Vesth.  Scutella has recorded and released two albums of his own, 1998’s “Love Is a Train” and 2010’s “Hang In There.” He has twice been a finalist at the prestigious Kerrville Folk Festival in Texas in 1998 and 2010, as well as a New Folk finalist in the Napa Valley Wine and Music festival in 1999. For tickets and more info, call 934-4090.

BackTrax classic rock band is back in action tonight, Aug. 12, at the Sebastiani Winery and Vineyards tasting room with a themed event they’re calling “Madcap Friday” where attendees are encouraged to wear any outrageous hat they have. Food will also be available from Community Cafe. The night kicks off at 6 p.m. and there is no cover.

Brian Nova, a fixture on the Sonoma Valley music scene before moving on to Seattle, has been given a very prestigious honor, he has been asked to play a dedication 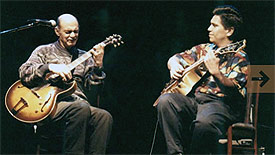 ceremony in Sicily, Italy, where a street will be dedicated to jazz legend Joe Pass. Pass was one of Novas mentors, and the two have shared the stage together many times. After the ceremony, Nova will be off to Paris, France for a couple shows. Nova has also been doing some recording for Concord records on Arturo Sandoval’s upcoming album due out in the fall and on Japanese superstar Seiko Matsuda’s new album at Capital Records. He has also been sitting in with the likes of Tom Scott, Kurt Elling, Mark O’Connor, Clint Black, Gordon Goodwin and many others this summer. Nova will be back in town in early September.

Jazz is back at the Ledson Lounge with Jess Petty and Ken Chambers appearing on Saturday, Aug. 13, for a 6 p.m. show.

There is no jazz this weekend at the Plaza Bistro, instead, a couple of local acts will grace the back room. Tonight, Aug. 12, it’s Train Wreck Junction, playing honky-tonk country western songs. Saturday, Aug 13, Plan Be, will be in the back room, playing a variety of musical genres. Showtime both nights is 7 p.m. and there is no cover.

Little Switzerland welcomes back the San Francisco Starlight Orchestra on Saturday, Aug. 13, for a 2 p.m. show. The orchestra was started in 1986 as a tribute to the 1920’s ballroom dance orchestras of the day. The 14-piece band plays dance classics and encourages you to “come dressed to dance the fox trot, Charleston, tango, rumba, waltz, lindy and more.” For reservations and more info, call 938-9990. Sunday, Aug. 14, Little Switzerland welcomes Showcase the Band for an early evening show that goes off at 5 p.m.

The Olde Sonoma Public House will have Smithfield Bargain on Sunday, Aug. 14, kicking off at 6:30 p.m. There is no cover for the show

Murphy’s Irish Pub has Savannah Blue in the Snug at 8 p.m. tonight, Aug. 12, for an 8 p.m. show. Saturday, Aug. 13, the snug welcomes Larry Carlin’s Mostly Simply Bluegrass Night, also for an 8 p.m. show. Sunday, Aug. 14, has an early show, kicking off at 6:30 p.m. with Sean Carscadden. To learn more about Carscadden, pick up the latest issue of SONOMA Magazine, where we did a feature on the up and coming local musician. There is no cover for any of the shows at the pub.

Sonoma Springs Brewery has Rick Hardin tonight, Aug. 12, for a 7 p.m. show. There is no cover.

Bobby Jo Valentine is making his way through the Valley this weekend, with a show tonight, Aug. 12, at the Charles Creek tasting room on the Plaza at 7 p.m. Saturday, Aug. 13, he is at HopMonk Tavern Sonoma for a 1 p.m. show. Valentine released his first album in February of this year and has received a very positive reception from fans and clubs alike. He has appeared on several radio shows around the Bay Area, and is currently playing shows along the coast of California.

The Full Moon Barn Dance will be this Saturday, Aug. 13, at the Circle JR Ranch in Carneros. Local teen band Traffic Jam will open the night, followed by square dancing from Evie Ladin and the Black Crown String Band and then bluegrass from Middle Maki and the David Thom Band. Proceeds go to the Sonoma Ecology Center’s Enviro-Leaders Internship Program and 18 Reasons Youth Programming. There are still some tickets available and can be purchased at the door. The event kicks off at 4 p.m. For more info, tickets and the venue address, call 933-6191.

Kunde Estate Winery will have “Tunes on the Terrace” on Saturday, Aug. 13, with the Mixed Company Band, kicking off at noon. There is no cover.

Landmark Winery and Vineyards has “acoustic groove” from Daniel Maya on the patio on Saturday, Aug. 13, kicking off at 1 p.m. 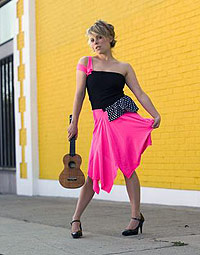 The Blue Moon Saloon has the crazy noisy sounds of karaoke on Saturday, Aug. 13, kicking off at 9 p.m. Sunday, Aug. 14, the best kept secret in the Valley continues with the Sunday night blues jam, kicking off at 10 p.m.

Dawn Angelosante will be in Napa at Acacia Winery for a late afternoon show today, Aug. 12, for a 4:30 p.m. show.

Local bluesmen the Hellhounds will be in Napa all weekend, starting tonight, Aug. 12, at Cuvee, for a 9:30 p.m. show. Saturday, Aug. 13, the guys are at Uva Trattoria for a show that kicks off at 8:30 p.m. Will someone get these guys a Sonoma gig?

Static People will be at the Rockit Room in San Francisco on Sunday, Aug. 14, for a 3 p.m. show.

Points North, featuring local guitarist Eric Barnett have a busy weekend, starting tonight, Aug. 12, with a show at the Alley Bar and Lounge in Ukiah, that kicks off at 7 p.m. Saturday, Aug. 13, has the band at Vinnie’s Bar and Grill in Concord where they will open for rock legend Pat Travers, kicking off at 7 p.m.

Hot 45s – Shows within a 45 minute drive from the Island.