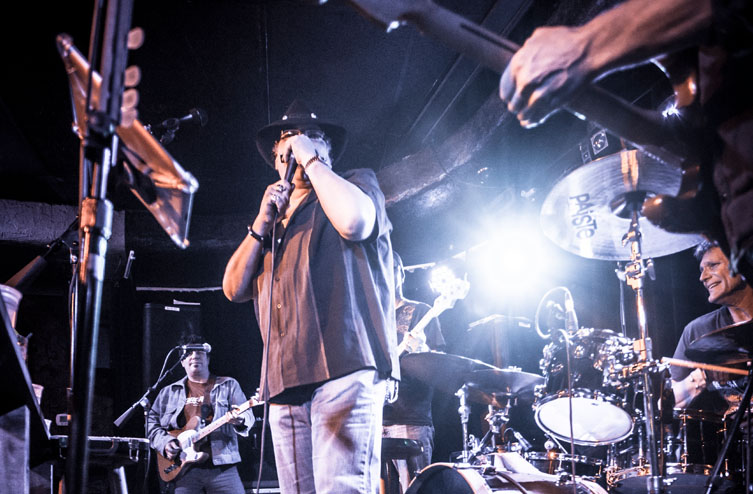 In what can only be described as yet another music coup for Sonoma Valley, John Popper of Blues Traveler will be bringing his new act, Brothers Keeper, to the Sebastiani Theatre on Saturday, Jan. 10. Popper along with Jono Manson, promoter of Phish, Blues Traveler, Spin Doctors and many other successful bands, collaborated with Brothers Keeper to write and record “Todd Meadows,” an album to be released late this summer. This debut from the band is an Americana-rock and roll album, featuring five lead singers, bringing together their wealth of experience, and a wide range of musical styles. Along with Popper tonight, the act includes Scott Rednor on guitar, Michael Jude on bass, and John Michel on drums. Opening the show will be Doobie Decibel System with the talents of musician-vocalists Jason Crosby and Roger McNamee. McNamee is a veteran of the Moonalice tribe. The duo is the blending of two distinct voices; McNamee’s crisp, sharp vocals, and Crosby’s smooth, low-register. Together they create audacious harmonies. When paired with their diverse guitar styles, they create a melodic sound pleasing to the ears. Show time is 8 p.m. and tickets can be purchased at the theatre box office or at the door, if still available.

Seems like it’s music, not movies this weekend at Sebastiani Theatre, with a return appearance of John Mc Cutcheon on Monday, Jan. 12, kicking off at 7:30 p.m. Called a musician for the ages in all of its meanings, Mc Cutcheon draws no lines between children and adults. Anyone who enjoys the honest rewards of folk music is welcome and people of all ages rush to hear him perform. He has appeared with Pete Seeger, with whom he is often compared, Arlo Guthrie, and Johnny Cash, who once called McCutcheon “the most impressive instrumentalist I’ve ever heard.” During performances, McCutcheon switches skillfully from banjo, to guitar, jaw harp, fiddle, auto harp, and piano. He is also recognized as a master of the hammer dulcimer, America’s only traditional mallet instrument. Placing the many instruments he introduces in their, he ethnic framework teaches the audience to make music themselves as he weaves tales as modern fables, rich in history and universal scope. Tickets are available at the Theatre box office or at the door, if still available.

The Sonoma Community Center kicks off its 2015 Winter Performance Series on the Rotary Stage in Andrews Hall with the return of “Black and White Jazz” on Saturday, Jan. 10. The music invokes the night-lights of downtown and the dim lights of a basement jazz club, the smooth tone of a muted trumpet and the sensual glow of a saxophone. “Last year we had three sold-out performances by Black and White Jazz,” said Executive Director Toni Castrone. “We figured this would be the perfect group to launch our 2015 performance season.” The group performs an eclectic mix of jazz from the Great American Songbook, cool jazz from the Blue Note-Columbia era, modern compositions from composers like Herbie Hancock and Michael Brecker, plus original compositions. Black and White Jazz founder and drummer Jimmy C has assembled some of the Bay Area’s best vocalists and jazz musicians, including Andy Dudnick on saxophone, Tim Wat on keyboard, Erik Nelson on trumpet and vocals, Ted Burik on bass and the group’s founder Jimmy C. on drums. A full schedule of performances, tickets and information is available online at svbo.org, by calling 938-4626, ext. 1.

The Sonoma Valley Regional Library has music and more on Saturday, Jan. 10, with Author and acclaimed rock journalist, Sylvie Simmons discussing her biography of Leonard Cohen, “I’m Your Man: the Life of Leonard Cohen.” Simmons is a London-born, San Francisco based music journalist, named as a “principal player” in Paul Gorman’s book on the history of the rock music press “In Their Own Write.” A widely regarded writer and rock historian, she is one of very few women to be included among the predominantly male rock elite. She is also the author of a number of books, including biography and cult fiction. Simmons will relate her odyssey to piece together all the details of the life the iconic and elusive Leonard Cohen. She will also accompany herself on ukulele with some Leonard Cohen songs. The event kicks off at 2 p.m. and is free and open to the public.

In case you missed the announcement in this publication on Tuesday of this week, that annual B.R. Cohn Fall Festival is looking forward to moving back to the City of Sonoma where it all began with a new location at the Field of Dreams and a new name, the Sonoma Music Festival. Some may recall that the first fundraising concert was held on a flat-bed truck on the baseball diamond at Sonoma Valley High School in ’92, which featured Graham Nash and Nicolette Larsen. With the shows generating over $6.5 million to local and national charities over the years, prompter-philanthropist Cohn is looking for a venue to cut down on some costs to have more money to donate to charity. “Build-out costs at the winery coupled with ABC requiring the winery to close for the weekend have made it too costly,” wrote Cohn. “By relocating to the Field of Dreams I can save over $100,000 in production costs which will be able to go directly to the recipients above and beyond what we normally raise.” At press time, the decision to allow the concert is being considered by the CSEC, but is expected to be approved. Look for line-ups to be announced soon.

Burgers and Vine present, from the “Royal Family of Reggae Music,” Peetah Morgan, alongside DJ Lionize for a night of reggae music. Morgan is on his first tour as a transition from having a full band to being a solo act, and has blended influences of rhythm and blues along with reggae music. Showtime is 9:30 p.m. and tickets will be available at the door.

The Annex Wine Bar presents Someone Else’s Nightmare tonight, Jan. 9, playing songs from their most recent CD release and more, kicking off at 7:30 p.m. Saturday, Jan. 10, it’s Tilted Halos playing acoustic covers of hard rock classics, along with some original music. The night also kicks off at 7:30 p.m. There is no cover but the venue is 21 and over only.

The Erik James Tasting Room has music tonight, Jan. 9, with Dallis Craft , Garth Webber and Gary Silva kicking off at 7 p.m. Saturday, Jan. 10, it’s Left Coast Syncopators, featuring Tim Eschliman, Snakebite Jacobs and Kevin Zuffi also for a 7 p.m. show. There is no cover either night, but there is a $10 minimum.

The Plaza Bistro welcomes Kenny Washington and Jeff Massaneri tonight, Jan. 9, for a 7 p.m. start. There is no cover.

HopMonk Tavern Sonoma has Kyle Williams tonight, Jan. 9, playing on the tavern stage at 8:30 p.m. Saturday, Jan. 10, the tavern stage welcomes Sean Carscadden. There is no cover and the shows are family-friendly..

Murphy’s Irish Pub presents Deluxe, formerly the Hellhounds tonight, Jan. 9, kicking off at 8 p.m. Saturday, Jan. 10, it’s Blithedale Canyon, also for an 8 p.m. show. The act is a country band from Marin County whose members are longtime friends with decades of experience playing various kinds of music. Imagine old-school country songs, bluegrass, and western swing, with a bit of old-time rock and roll, with three lead singers and mellifluous three-part harmonies. Sunday, Jan. 11, the pub has the Bumblin’ Bones for an early start at 6:30 p.m.

If your gig isn’t in my column, you didn’t tell me about it. Hit me up at jmberry@sonomamusic.com.