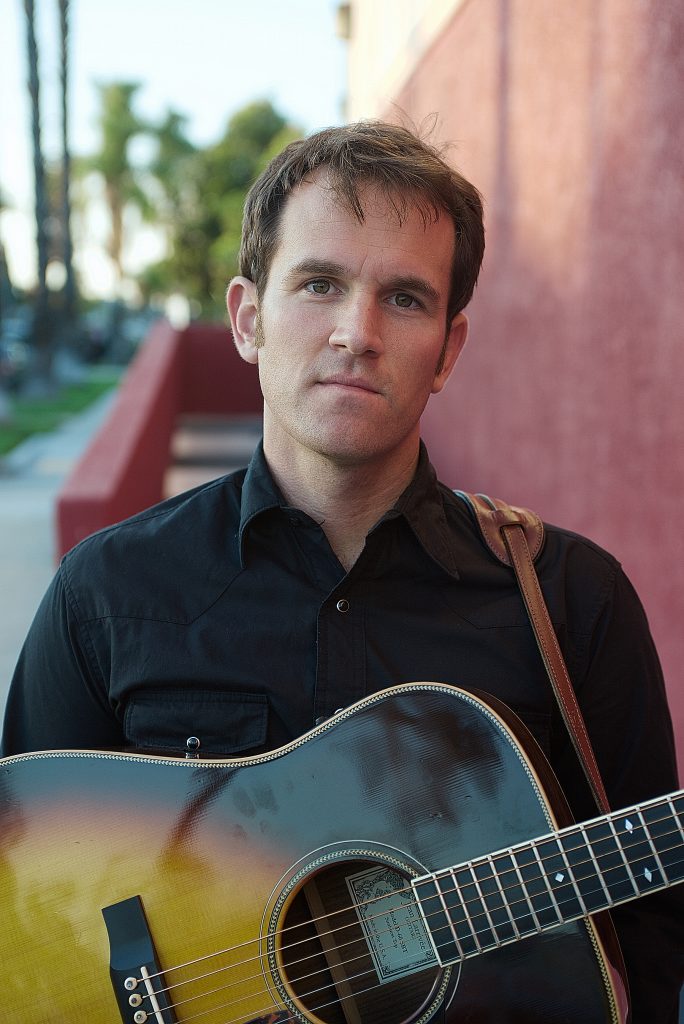 McSpadden grew up in the central Texas hills, where he was fed a steady diet of two-step and dance hall music as a child, with his dad bringing him to see some of the big acts coming through town and attending dances in the clubs with his friends, where teenagers were welcome to come “join the party.” Once the musician bug bit him, he left Austin for Chicago, where he fronted the country act “the Hoyle Brothers.” Stepping out as a solo artist, he now has Grammy-winning producer Pete Anderson producing him and has just released his latest album “ The Only Way.”

McSpadden brings his act to Sonoma Valley on Sunday, June 17, for a late afternoon show at Rossi’s 1906 Roadhouse, kicking off at 5 p.m. We managed to touch bases with McSpadden so let’s find out a little more about him with the usual six questions.

1) Many musicians in our generation cite the Beatles on Ed Sullivan as that moment when they knew music was what they wanted to do. When and what was it that made you realize you wanted to be a musician?

TM > Well, I’m only in my 30’s so I missed most of all that, but it was my dad taking me to see music with him growing up in Austin, acts like Junior Brown and Dale Watson, but the act that really did it for me was the Derailers. The had a West Coast- Buck Owens kind of sound going and I thought I’d really love to be able to play songs like that.

2) That first instrument you owned. What was it and do you still have it?

TM > Oh it was a cheap Japanese copy of a Gibson called a Conqueror. It was a big guitar, a Hummingbird knock off. It was my grandpas and no, we don’t own it any longer. He donated it to a local music school in Austin for kids that didn’t have instruments to play. It really didn’t bother me at the time but now I kind of wish I still had it. I just hope some kid is playing it out there somewhere.

3) Who are you’re primary influences in your music?

TM > The Central Texas dance scene. My folks would get all us kids into a Suburban and drop us off at the dance halls. But it was Nick Lowe that truly spoke to me in music. The way he captures a phrase and really has a classic sound, not retro, but classic. There’s a big difference between those two.

4) What CD or playlist is in your car or your iPod?

TM > Well, I’m driving my car now so let’s see. I like to go to the local library and just borrow CD’s and have a variety of music to listen to. Looks like the two I have now are Loretta Lynn and Porter Wagoner.

5) Tell us about your current acts.

TM > I’m kind of new to California so I don’t really have a band, but a roster of musicians that play with me depending on the venue. I usually like just a duo or trio but can have a big band available if the venue is right for it. This weekend I have Dave Gleason on guitar and Tim Sarter on bass. Gleason is a real honky-tonk picker with a Bakersfield feel. He gets a real Buck Owens vibe out of his Telecaster.

6) If you could have written one song, which one would it be and why?

TM> Oh boy, I’d have to say “Help me Make it through the Night” by Kris Kristofferson. We play that song at about every show we do, and the simplicity of it is the magic of country western songwriting, to me anyways.

SONOMA, CA – The volunteer Board of Directors for the Valley of the Moon Vintage Festival has announced the musical entertainment for the weekend with two full days of free live music

“We really wanted to feature the local musical acts from Sonoma this year and we think there’s something for everyone” said Maria Toimil, president of the festival board, which is exactly what the theme is for Saturday, Sept. 24, “Something for Everyone.”

Kicking off the day at 11 a.m. is local teen act Heroes Turn Human who recently won the battle of the bands in Santa Rosa. Next up is the Rich Little Band, with Scott DeMartini and two local winemakers, Rich Little and Jeff Bundschu, playing unique versions of rock songs with some originals as well. T Luke and the Tight Suits are up next. Bandleader Luke Domingue is the son of the late Ritchie Domingue from the band Gator Beat and proving the apple doesn’t fall from the tree, the act puts on an electric set of Cajun-Zydeco dance songs. Who doesn’t like the Beatles? Rubber Soul, the local acoustic-electric Beatles tribute act has been packing rooms all over Sonoma Valley and will have you singing along and dancing in no time at all. Wrapping up the day is the Pulsators with their own style of Louisiana dance music, laced with R & B and even a little Reggae.

Sunday, Sept. 25, it’s “Sonoma Country Sunday” with three country acts that will have you dancing all day long. The day kicks off at noon with Buck Nickels and Loose Change, featuring Buck Nickels on guitar. Next up is Western Swing Hall of Famer Tommy Thomsen with his band of all stars, stepping away from the swing for a day to play some good old country music. Wrapping up the day will be Train Wreck Junction. Nick Kardum and the band have been taking over Northern California playing those classic country songs that no other bands seem to play, and people are loving it.

Music for the weekend is free of charge and open to the public and families are invited to come down to the Sonoma Plaza and enjoy some local music talent.

The Valley of the Moon Vintage Festival is celebrating its 119th year and is the second oldest festival in California, following the Rose Parade. The festival is always held on the last full weekend in September. The festival is free and open to the public; proceeds benefit many local Sonoma Valley nonprofits including Native Sons of the Golden West, Parlor #111, Sonoma Jr. Dragons, Sonoma Fire Department, Volunteers in Policing, Sonoma Valley High School Wrestling and  Cross Country Team and Hanna Boys Center. For more information on the Valley of the Moon Vintage Festival, please visit valleyofthemoonvintagefestival.com or contact the office at 707-996-2109.

If your gig isn’t in my column, you didn’t tell me about it. jmberry@sonomamusic.com