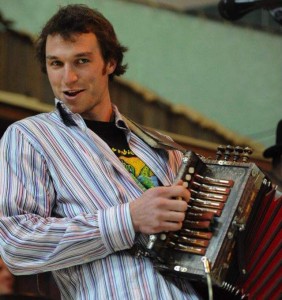 Luke Domingue didn’t become a musician in the typical fashion, playing in garage bands as a teenager, listening to the Beatles or Led Zeppelin, while his father Richie Domingue was fronting the successful act Gator Beat, Luke was busy being a two-sport star athlete at Sonoma Valley High School, excelling in football and basketball. For over 20 years, Gator Beat toured the western United States as one of the première cajun-zydeco acts in the country. On a personal note, the first time we were exposed to the genre was in the ‘90s at a Gator Beat show here on Sonoma Plaza. Richie came home from a sold out show at the Sweetwater in Mill Valley on the morning of July 3, 2005 and went to sleep. He never woke up. Distraught and missing his dad, Luke picked up his dads guitar and started playing a few chords, learning some of his dads songs, pickin’ a little here and there. He had a little experience on the drums as a child, but the stringed instruments were new to him. Then it was the squeeze-box; a staple in Cajun music. Roll the clock forward nine years and Luke has put his own act together and is now playing the very songs live that his late father wrote and performed for all those years. Called T Luke and the Tight Suits, the act is quickly picking up where his father left off and sharing the music and songs that made Gator Beat such a popular act. He has surrounded himself with former members of Gator Beat, and even his mom, “Ma Gator” Carolyn joins in on the washboard from time to time.

The act has no problem filling a dance floor as the music just can’t keep you from tapping your feet. T Luke and the Tight Suits will be at Burgers and Vine on Saturday, March 28, kicking off at 9 p.m. and they will also be doing a live recording to be released soon as an album. If you can’t make that show, keep an eye out for this act. It’s one not to miss.

Spin of the Week: Music Movies

Hollywood has been trying to pair music with film since 1927, when the first “talking picture,” the Jazz Singer, was released, and the 18th annual Sonoma International Film Festival is carrying on the tradition with some great music-themed movies as a part of the festival weekend. They also have a slew of local talent in the backlot between movies. See the rundown for the backlot schedule.

A Shot of Whiskey – Little did they know when they built the strip clubs on Hollywoods sunset strip they would actually become the venues that would make famous a number of bands from the ‘60s to even now. The Whiskey, the Troubador, the Viper Room all had a hand in showcasing the Doors, Metallica, Motley Crue, Van Halen and more. The movie tells the story of those clubs. Showing Saturday, March 28 at Burlingame Hall at 6 p.m.

Free to Rock – As American teenagers were wallowing in the new sound of Rock and Roll in the ‘50s and ‘60s, the teenagers behind the Iron Curtain in Europe had a different name for the genre. “The Sound of Freedom” is what they called it, when they actually had the chance to hear any western music. We all know how that music changed America. The movie shows that it wasn’t just America that was changed through rock and roll. Showing Sunday, March 29, at 10 a.m. at the Sonoma Community Center.

Legends of Ska – Without Ska, there would be no Reggae, or so it’s said. The movie explores the legends and mystery involving the creation of the genre in Kingston Jamaica, focusing on the years 1962 – 1966 and includes vintage concert footage from the time. Showing today, March 27, 6:30 p.m. at Burlingame Hall and Saturday, March 28, 8:30 p.m. at the Sonoma Valley Womans Club.

The Winding Stream – This documentary focuses on the Carter Family and their contribution, tracing the family back to it’s roots all the way to A. P, Sara and Maybelle all the way to today. The connection with June and Johnny Cash is also part of the story and tells the story of how the family is striving to keep the music alive. Showing Saturday, March 28, 2:30 p.m. at Burlingame Hall.